It is time for my weekly update on my weight loss journey. This week, I weighed in at 313.8 pounds. That’s a one pound loss and that’s a new low for me as well.

Last week, I reported that I was on target to be below the 314.8 I checked in as. That’s because on Wednesday, I did a mid-week check. I don’t always do these, but sometimes I do. And so a week ago Wednesday, I was 314.6. So I was fairly confident that I’d lose the required weight. However, a week ago Thursday, I checked the scales again and found them clocking me at 316.2. 😱 That’s why I decided that maybe the American cheese on the hamburger patties I got from Wendy’s may have killed me last week.

This week, I had a similar scare. I was a bit bummed last Friday due to the lack of weight loss. And since I had to stay up late anyway, I decided to go ahead and just go nuts by indulging in a microwave meatloaf with mac-and-cheese. It was quite good, but a ton of carbs and calories. So this past Wednesday, I decided to check my progress and saw I was at 314.4. I was stoked about that. Then Thursday morning, I was 316.0. So I wasn’t sure I’d lose anything. But I checked a ton of times, including after my shower Friday morning. And the weight remained constant at 313.8, so hopefully the scales weren’t wrong.

Last week, I mentioned that I was fancying a fat burger and fries from Five Guys Burger and Fries. However, I had an errand to run Friday that took me to a different part of town. As such, I shifted from Five Guys to Red Robin. I couldn’t remember the last time I ate there, so it ended up working out perfect. I scored a Monster Burger with extra fries. 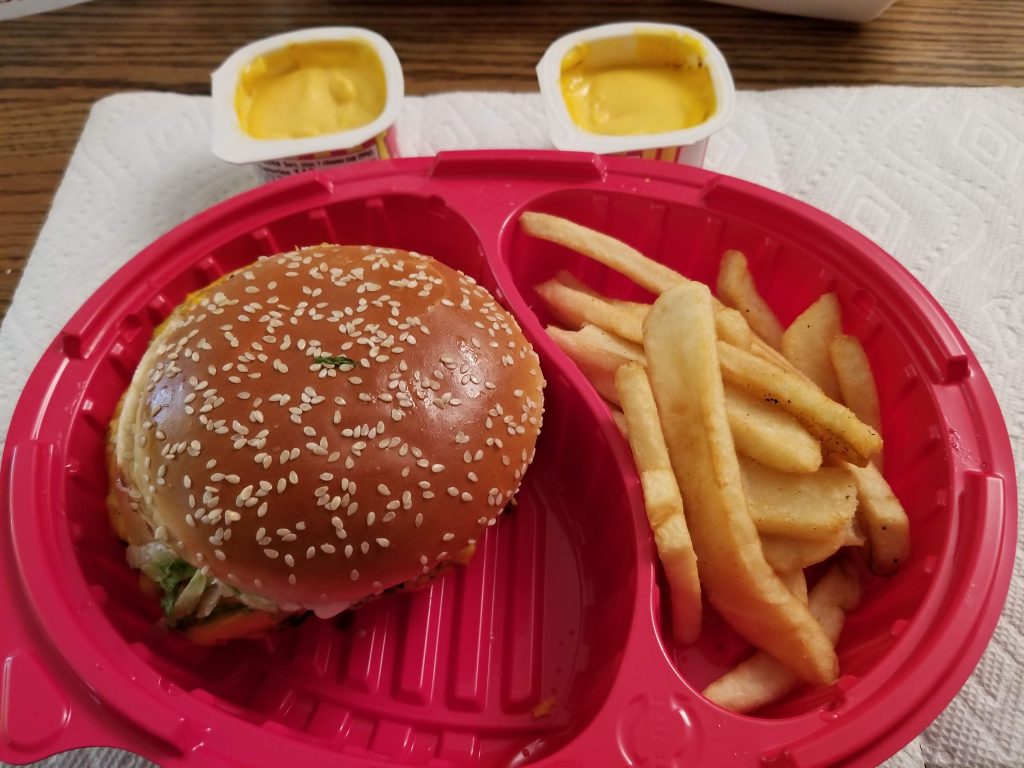 Man, did they ever hook me up on the fries. It isn’t evident in this photo (I was pressed for time since as soon as I walked in the door with my food, I was pressed into a last-second meeting), but they gave me FOUR additional things of fries. AND to top it all off, they gave me a cup of fries for my trip home. Naturally, I was elated by this, but even I couldn’t suck down all of the fries. But I gave it the old college try. 😅

By the way, the nacho cheese cups seen did NOT come from Red Robin. Those are microwavable cups i bought at the store.

Since I’m writing this late, I already had an unexpected failure Friday night/Saturday morning. Again, it ends up being another frustrating, late night at work. And I end up going, “You know, I don’t care! I’m having sometime!” So I scarfed a lot of stuff, including some buttered rice, bacon, and the rest of my Doritos with another couple of cups of nacho cheese sauce. 😑 But, I’m going to try to be careful the rest of the week. And indeed, as I write this, I’m ignoring hunger pains at 2 in the morning.