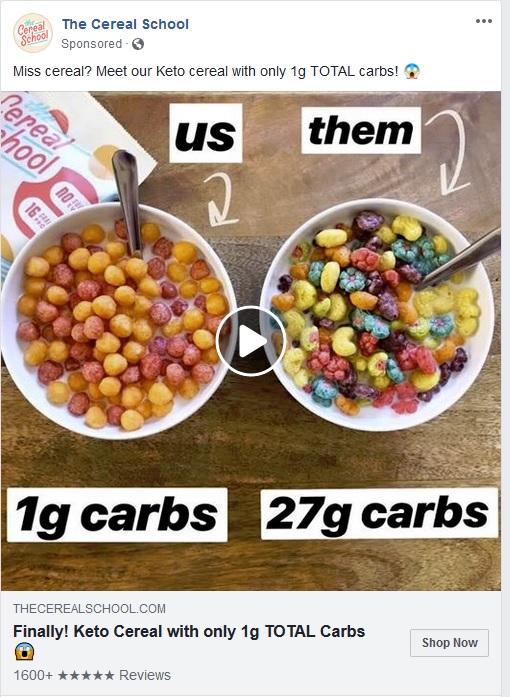 While I was working all night tonight (after working much of the day), I decided to scan Facebook to see what friends and family were up to. Since I’m following a low-carb diet, an ad appeared in my timeline that caught my eye. It was from a company called The Cereal School.

Looking for the Truth

Unfortunately, every review comment in their Facebook thread regarding the product was glowing and gushing. There were people asking questions or whatever, but there were zero negative remarks. And that’s a red flag.

So I did some deeper searching and it turns out, if you say ANYTHING negative about their product, they just delete your comment, even if you stated why the product wasn’t good. While The Cereal School are free to do this, it is a pretty scummy move. It is dishonest to the highest degree. But it seems that The Cereal School want to scam as many people as possible, who like myself, who miss having a nice big bowl of sugary cereal with icy cold milk.

Look, I get wanting to promote one’s product. One thinks that their product is awesome, and anyone saying otherwise MUST be a hater and thus we need to remove the comment. Either that, or they know they have a meh product, but they want to scam folks out of their money before word of mouth overcomes their attempts to hide the truth. Considering the outrageous price of this cereal, I’m thinking it is the later.

Giving This a Pass

As for me, I’m not even going to try the cereal. Removing negative reviews and only highlighting the gushing ones isn’t a company I want to do business with.

So, I may take a carb splurge meal sometime in the future and buy some really “terrible” sugary cereal. Or maybe just Special-K and add a lot of sugar, so I can have that sweet, sweet sugar milk at the end. 😂