Well, the bad week for eating is over, so it is time to see what the damage was from my trip to Jersey City, NJ, which included a trip to Manhattan. The scales reported back a non-surprising 324.4 pounds, so I’ve got my work cut out for me.

My job required me to head out to Jersey City to learn the Control-M scheduling tool with an expert consultant at the NJ site, who’s building the infrastructure even now. Of course, this meant that eating was going to be difficult, so I had already decided that I just wasn’t going to worry about things too much. As such, I went to breakfast with Dev-san (who was with me on the trip) to various places, including a restaurant in the hotel (The Westin), which had a very expensive but tasty grilled ham and eggs meal.

For lunch, we usually just went to the mall, which is near the hotel, since they have a massive food court and the meals aren’t quite so expensive.

For dinner, we went to all kinds of places. Sunday night, we went to Komegashi, where I had my favorite Japanese dish, katsudon. (Sorry for the dark picture – the Blackberry features are still new to me). 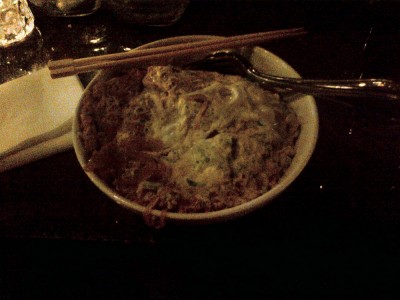 While the food was really good, there weren’t a lot of Japanese people working it (if any since the guys at the sushi bar may have been Chinese).  Not that this is a problem, but being out east, I thought Japanese places might be more likely to be run by Japanese folks.

Monday night, we went to Manhattan for a stop at Yakitori Totto.  From the website, I expected some sort high end, hoity-toity, modern place, more in line with Komegashi, only fancier. I was shocked to discover that the place is actually very tiny and older (but very clean and nice) and though access is from the street, one has to go immediately up narrow stairs.

This is a true Japanese restaurant. The staff were all Japanese, including one half-Japanese waiter. They all speak fluent English and Japanese, so no language barriers to cross.  The tiny restaurant is so much like a place one might find in Japan, I told Dev-san that if I closed my eyes, I could be in Tokyo for all I knew. So for me, the atmosphere was great.

Since I love donburi dishes, I had to have the Tokusen Oyakodon (chicken and egg over rice).  In hindsight, this was a mistake, but not because the food was bad. It was quite good. No, the mistake was in not just going with the yakitori stuff. I tried the negima, washu beef, and bacon asparagus yakitori as well as the chicken leg yakitori. Man was that incredible, so much so that I would have wanted more had I not filled myself on a rice dish. ^_^; 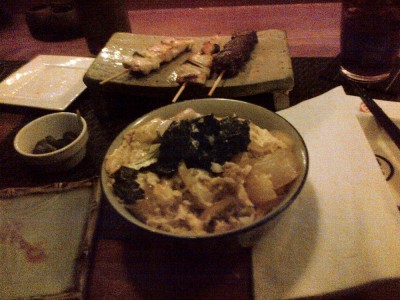 Again, sorry about the not so great photo. ^_^;

We didn’t just do Japanese food I could talk about the big steak I had, or the lobster mac-and-cheese I had, all of which were great. Instead, I want to talk about how I finally got to live a Red Dwarf dream when we went to Raaz, an Indian restaurant. I’ve only been to one Indian restaurant before, which was pretty good but limited. When I saw that Raaz had Chicken Vindaloo and Poppadoms, well, my meal choice was set. After all these years of hearing Lister and the others from Red Dwarf talk about vindaloos and such, I finally have tried it, and it was good, though I preferred the garlic naam over the crispy poppadoms. 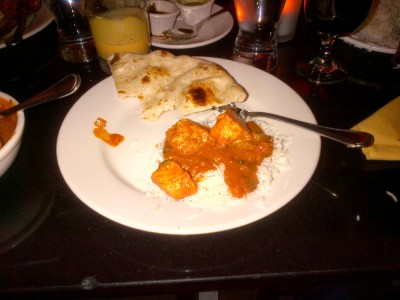 This was just a small serving. To the left is the bowl of chicken vindaloo sans rice or anything. In the upper-right corner, you can just see a plate of rice, which we all shared. And there was a whole basket full of the naam, which I really liked.

So yeah, a decadent week for eating, to be sure. However, now that I’m back home, I have to get back on the bandwagon for losing weight. ^_^;