It is the end of the second full week of 2014, which means it is time for me to do my weekly weigh in. I am happy to report that the positive progress continues as the scales reported my weight this week at 321.2, which is a loss of 1.6 pounds from last week’s 322.8.

It was a pretty normal week. No faltering on my 5:2 Diet days, nor on my Carb Addict Diet days. I did have a close call last night as I became the cameraman for some friends making a martial arts training video, but because the recording session ended up lasting until 22:00, their plans to take me out to eat awesome Japanese food are being delayed until this upcoming week.

Being a big Florida State Seminole college football fan, my boys winning the final BCS National Championship was pretty awesome for me.  I’ve been a Seminole football fan since I was a kid in 1978.  FSU’s previous national championship titles were nice, but not quite what I wanted. In 1993, FSU had one loss in the regular season, so that national championship was tainted to me. In 1999, FSU had a good year, but with one close call against an unranked Clemson team, where FSU only won 17-14.

This year was the year I’ve been looking for. FSU spanked every team they played in the regular season, including scoring a record-high 80 points in one game. Only our arch rivals, the University of Florida Gators, held us under 41 points.  Even there, we won 37-7, so there was no mistaking who the dominate team was. ^_^ Now that we know the only reason Auburn was able to hold FSU in check during the first half of the BCS National Championship game was because they were stealing the signs, FSU’s close call win over Auburn in that game no longer disappoints me (I had hoped FSU would spank Auburn).

So, why tell you this?

Well, being that my current girth means I’m wearing 5x t-shirts (if I wore jeans over my gut, I could wear 4x with no real problem), there are no FSU National Champions t-shirts in that size. The biggest one I could find was 3x.

As such, I now have a new, additional mission — lose weight so I can wear my FSU Nation Champions t-shirt.  ^_^ 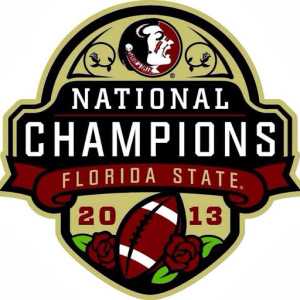