Another week has come and gone, and with it, it is time for a new weight loss check-in report. With the fun of the week, what do the scales say?  I was completely stunned when the scales reported a weight of 321.2, a weight loss of 2.4 pounds. Don’t get me wrong, I’ve very happy about this, but I didn’t think I’d lose much weight at all. Indeed, I had to check the scales several times this morning.

To be honest, it wasn’t a great week for me on the weight loss front.  One element of the fun was having one of my 5:2 Diet fast days hijacked at work due to foods being served there. Company B provided tubs of various flavored popcorn, cookies, muffins, pretzels, and more. Then, there was the free pizza. Well, it is the festive season, so they say. ^_^;

Another element of the fun came when one of my comrades in the development team, “Dev-san” (not a very creative name, but there ya go), invited me to his house last Saturday for food and a movie. He is married to a Japanese woman, so the promise of a home cooked Japanese meal was too much to pass up, even though this meant violating the Carb Addict Diet part of my weight loss scheme.  ^_^

Mrs. Dev-san decided to go mostly with izakaya type foods, which are the Japanese equivalent to “party foods” in my mind as everything is bite-sized and rice is off the menu for drinking purposes.  It was really good, so I thought I’d breakdown what we had.  (The pictures aren’t from our actual get together, but next time we do this, I’m bringing my camera for sure!)

Karaage — These are bite-sized, fried chicken pieces, similar to boneless chicken wings without any sauce on them. The breading and seasoning on karaage is a bit different from American breading on fried chicken, but it is quite good. 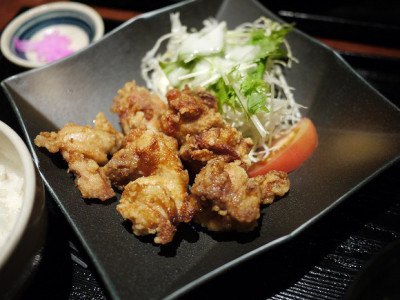 Okonomiyaki — This is often called a Japanese pancake, but I rather dislike calling it a pancake. However, because there’s a batter, the term “pancake” is used. That being said, the one made by Mrs. Dev-san was a veggie one, meaning the batter had shredded cabbage and onion. It was cut like a pizza and was very much like a pizza in how it looked, though one doesn’t pick up a piece of okonomiyaki with one’s fingers. Regardless, it was most excellent. ^_^ 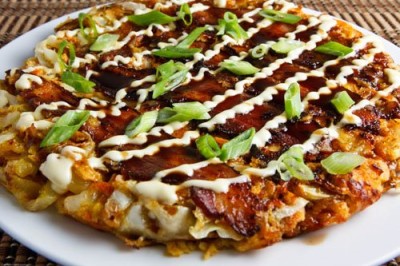 Cold tofu salad — I’m not a fan of tofu, which is rather bland on its own, and it has a texture that for some reason doesn’t go well with me. Mrs. Dev-san did an excellent job of presentation and it was well made (unlike the picture below, hers had halved small tomatoes all around and some other garnishment and a dressing). I just don’t care for tofu, but I had some just the same. ^_^ 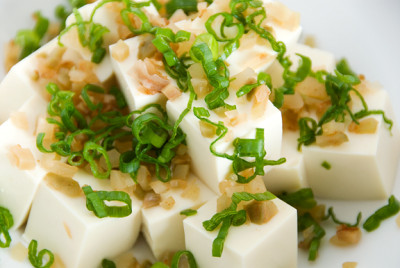 Yasai no Nikumaki — In English, this would be Beef and Vegetable Rolls. By “rolls”, I don’t mean a bread product, but rather shaved beef steak that’s wrapped around a vegetable stick of some kind, then fried. Mrs. Dev-san used green beans as her vegetable (the image below uses some other vegetable), and man, was this awesome. ^_^ 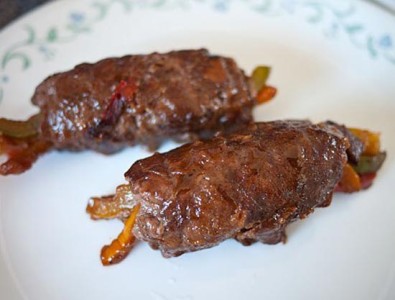 Nibitashi Zucchini — Nibitashi is a kind of vegetable cooking where the vegetable is boiled in  dashi. Dashi is a kind of broth, stock, or soup. In this case, it was a broth made from soy sauce.  Obviously, the vegetable here was zucchini (sliced), but Mrs. Dev-san also made the nibitashi with bacon.  As a Southerner, I fully approved of this, since bacon makes lots of things taste better. ^_^  No images ’cause there was nothing on the Net like what we had.

Tamago-maki — This dish is a type of Japanese omelet (different from a Western omelet), which is rolled up and cut into pieces. Very good stuff.  (Sometimes, this is called tamagoyaki.) 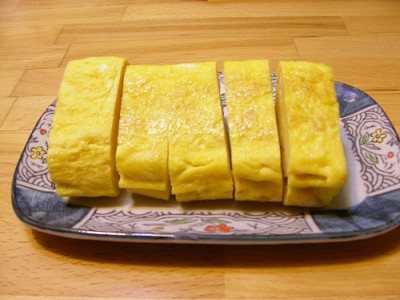 Nimono Kobacha — Nimono is another Japanese cooking style (simmering) and kobacha is a Japanese pumpkin (sometimes referred to as a squash).  Very tasty indeed. ^_^ 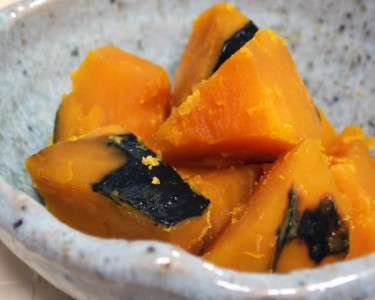 Oshitashi Nappu — Oshitashi is another Japanese cooking style. Instead of the usual spinach that seems to be used for oshitashi, Mrs. Dev-san used nappu, which is Chinese cabbage. This was topped with katsuobushi, dried bonito fish flakes. This was the one thing that I wasn’t sure about, but it was most excellent. The bonito flakes came off more like dried, bacon flakes rather than fish flakes. Regardless, I really liked it.

There was sake and umeshu to boot (rice wine and plum wine respectively).  Good stuff and good times. ^_^

More fun happens next week. We’ll see how the weight loss goes. I can already report that my Saturday was completely destroyed for losing weight. ^_^;