Well, it is that time of the week again, whereupon I have to face the scales to see what they say for this weight loss report. For this week, the scales say 329.4, a disappointing but not unsurprising loss of only 0.6 pounds.

This past week was pretty disastrous for me in terms of weight loss. I’m usually pretty lax on Saturday’s and Sunday’s in terms of what I eat, though I still follow the Carb Addicts Diet plans for these 5:2 Diet non-fast days. Then, I try to be pretty good the remaining five days of the week, two of which are the 5:2 Diet fast days where I consume less than 600 calories.  So what’s going to need to change is not being so lax on Saturday and Sunday when it comes to overall calories.

So, with that background set, I went into Monday to return to my, “let’s be good” phase. As such, I started the morning with a couple of eggs (~200 calories) and some sausage (~250 calories).  Not bad and low carb to boot. However, about an hour after I got to work, military veterans were asked to go to one of the conference rooms, where I discovered they were giving us breakfast. It was a nice gesture, but I knew I was in trouble immediately since I had nothing to store this in for later consumption, unlike when my contract company brings in breakfast for us and they usually announce it a day ahead of time.  I decided that if I only took a small amount of what appeared to be egg pie and one sausage link, maybe I’d be OK. I’d eat my lunch later.

Once lunchtime came, I did as planned and to my horror, discovered that I’d spaced out on actually putting my lunch into my small cooler. I had the freezer packs and my beverage, but no food. That meant I had two choices — go hungry or go out and get something. I wasn’t going without! Since I wasn’t in a very positive frame of mind, I decided that I just may as well go to Wendy’s since I haven’t had a cheeseburger in weeks, so that’s exactly what I did.

I’d planned to get a Dave’s Hot ‘n Juicy 1/2 lb. Double and a large fry (though the Bacon Portabella Melt looked tempting), which I know some folks I know would say, “That’s still too much food!” When I drove to Wendy’s I got into the drive-thru which was slow as molasses. My mood was not improved when some smeghead cut in front of me in line (not sure how that managed to get pulled off), nor was my mood improved when I learned that when ordering a combo, Wendy’s apparently no longer sells sweet tea nor Mello Yellow. *_* So I did what I usually do when I’m not in a proper frame of mind — I get stupid.  As such, my mouth ordered the Dave’s Hot ‘n Juicy 3/4 lb. triple combo. *_* 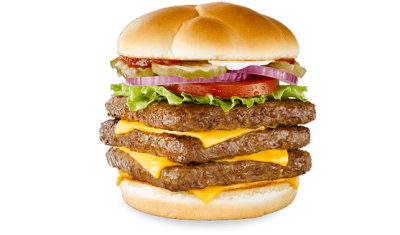 I returned to work and enjoyed my large cheeseburger (I love cheeseburgers), though I did think, “I’m going to pay for this.”  Before I could finish eating, a couple of maple donuts were dropped off at my desk because the person giving them away didn’t want them to go to waste, and naturally I took two. Again, since I had nothing to save them for later with, I ate them as well.

Ah, but then there was Thursday. Some friends have been wanting to get me out of the house to go see a movie with them. After they picked a movie theater which I could easily get to from work that was also located in a direction that would get me home, I agreed. They wanted to do Philly cheese steaks, so we met there after work.  I shifted my carb meal for the day to dinner, but eating such a meal in the evening is not great for weight loss. I did refrain from getting the large cheese steak sandwich, which is what I usually order, and settled for the regular. But, I did order the large fries, which I shouldn’t have done.  I didn’t eat nor drink at the movie theater, so had I not been so terrible Monday, I don’t think Thursday’s splurge would have been too costly.

Frankly, I really thought that I’d either have no weight loss today, or I’d even gain a bit. Thankfully that didn’t happen.

Since I’ve already blathered enough, I save the weight loss milestone talk for next week. I will say that my next milestone is 280, but I’ll go into the why’s and such when I discuss this in detail. In the meantime, I’m going to try to have a good week.