It is Saturday again, thus another week in my weight loss journey has passed. That means it is time to get on the old scales and find out if I’ve succeeded or failed for the week. Thankfully, I can report success as I weighed in at 327.2 pounds, a weight loss of 2.2 pounds.  So, I’ll take some time a little later to discuss my weight loss milestones.

This was a week which I knew well in advance was going to be a bad one. On Tuesday, my contract company rep took me out to lunch at 3 Margaritas, a Mexican restaurant where the portions are quite large, even when not indulging. I got the Macho Burro (Macho Burrito), which was pretty good. No margaritas though. 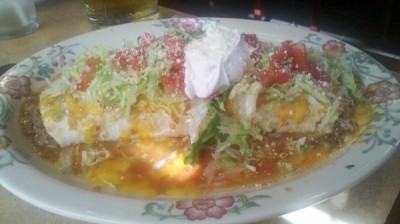 Thursday, Company B, where I work, provided us a massive Thanksgiving lunch with thick sliced turkey breast, thick sliced ham, real mashed potatoes with gravy, stuffing, cranberry sauce, salad, and rolls with real butter. There were also cookies, donuts, apple pie, and pumpkin pie. An amazing spread to be sure, and one which even though I didn’t eat seconds, it felt like I’d eaten a ton.

As such, I did what I could to make sure these two bad days wouldn’t affect me as badly as they could have. I tried to be very careful on the other regular days, and on my 5:2 Diet fast days, I decided to go carb-free and forgo my usual small meals which contain carbs. Since I met my 2 pound goal, I was successful, for which I thank God.

Now, as to my weight loss milestones, I thought I’d break them down.

Anything below 179 would be great. I think 165 would be ideal for me as a final goal, but it will be difficult to reach to be sure.

Regardless, I have a lot of work in front of me. It took far too long to get below 330 pounds, and it will only get harder as the weight loss continues. Nevertheless, I must keep pressing forward.