Another week has passed, and of course, that means that it is time for me to get on the scales to see what number awaits me there. This week, the scales say I weigh 331.6, a loss of 1.6 pounds.  Considering how my weight loss plans were waylaid on Friday, I’m considering this a win.  And it is the lowest I’ve weighed since I started this whole weight loss journey.

Last week, some of the guys I work with had been pestering our boss about buying us a free lunch. I guess he does that from time to time.  So, he agreed to do so for Thursday of the following week.  As such, I made arrangements so that the 5:2 Diet fast days would not be on Thursday. Unfortunately, Thursday came and not only did issues force my boss to cancel our weekly staff meeting, he also had to cancel the lunch and reschedule for Friday.  As Friday had already been designated a fast day for me, I was in a bind.

I decided to play it by ear and proceed as if it was a fast day.  As such, I had only a boiled egg for Friday’s breakfast (90 calories). The boss came by that morning and told us to get in our orders for Red Robin. That meant no fast day. Instead of a Royal Red Robin cheeseburger, which is what I would normally order, I decided to go with the Red Robin Arctic Cod Fish and Chips. 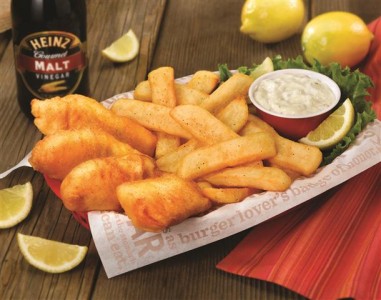 I noted that a serving of fries were ~450 calories, but I also know from experience that sometimes, you can get a lot of extra fries and sometimes not as many. That being said, I thought that maybe I could get away with just eating the fries and still be mostly OK. Fries don’t reheat well at all. I’d save the fish for later.  However, as it turned out, when the fish and chips arrived, I realized that the fish wouldn’t really survive being taken home and reheated later. So I made the supreme sacrifice and ate the whole thing. Man, it was tasty fresh. ^_^

Still, that did leave me in a bad way.  I decided to use this as an experiment to see what would happen.  As such, when I came home Friday night, I just had a single boiled egg for dinner and waited to see the results, which turned out to be pretty decent, all things considered.  Had I done Friday as planned, I know I would have easily lost two pounds. ^_^