It is a new week in my long, weight loss journey, and as always, it is time to see what progress, if any, I have made over the past week. Fortunately, there is good news to report as I checked in with the scales at 333.2 pounds, which is a 2.8 pound loss.  Good news for sure. ^_^

As witnessed with the post title change (and some category/tag modifications) and as mentioned last week, I decided to add a new element to the 5:2 Diet scheme to assist me in my weight loss. When I was working 12 hour shifts, the 5:2 Diet worked OK, though I had major problems with overeating on the day after a fast day. Once I shifted to a “normal” 9 hour work day, I discovered that while the 5:2 Diet had good uses, I was killing my efforts in other areas and I needed to fix that asap.

The solution I came up with was the Carb Addicts diet. Several years ago, I was on this diet and went from 330 pounds to 285 pounds, with less issues of setbacks than I had with the 5:2 Diet. However, I went on vacation, got off the diet, then didn’t want to get back on it. I did make an attempt, but there were issues I had with the diet, especially working 12 hour shifts.  More on that in a bit.

Basically, the Carb Addicts Diet works in two ways. First, it applies a discipline element in that one can only eat a single carb meal a day, and that within a small window (I’m basing my info from the book that was produced by Drs. Rachael and Richard Heller several years ago so I don’t know if they’ve changed a lot since then). The other two meals are basically carb free, meaning no more than four net carbs per meal. So, even if I do buy some chips or snack cakes, I don’t touch them unless it is in that tiny window (it was an hour window, but I usually make it 30 minutes).  It really makes a difference and since I’ve proven that I can keep discipline on my fast days for the 5:2 Diet, then I know I can (and will) keep discipline and not do carbs outside the window.

Secondly, the Carb Addicts Diet works on the body chemistry, which helps with appetite suppression. As I understand it, when one eats, the body detects this and immediately sends insulin into the body to deal with carbs that are being consumed.  The amount of insulin released is based on the amount of carbs consumed previously. About an hour later, the body does a second insulin release if needed. If you have consumed no carbs (or less than four net carbs) but only protein, then that second insulin release is not triggered, as I understand it.

What this does is make it so that you stop craving carbs, not to be confused with not wanting carbs. By craving, I mean that deep feeling that one generally succumbs to of, “Man, I’ve got to have some Twinkies and a big bag of Spicy Nacho Doritos dipped in a tub of sour cream right now!”  By wanting carbs, I mean a feeling of, “You know, I think I’ll grab a few Doritos with my carb meal today and maybe a Little Debbie Swiss Roll because it sounds tasty.” 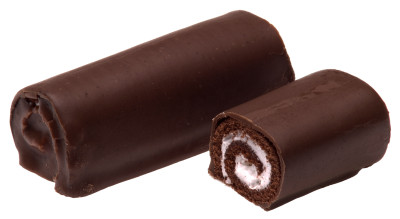 It does work because the ultimate test for me is a box of Little Debbie Swiss Rolls. Under the 5:2 Diet alone, I probably would have scarfed an entire box over the course of the day after a fast day, assuming I had them in the house. With the Carb Addicts Diet, they lasted for well over a week, that with eating one nearly every non-fast day over the past past nine days.  The discipline helps, but in addition, the massive craving just isn’t there, which is why I even skipped a day.  I even have a bag of Doritos that I’ve had for nine days that haven’t even been opened, something that would NOT have happened on a strictly 5:2 Diet plan.

So now, when I eat a carb meal, I find I eat less, even if I do consume a Little Debbie snack cake or the like. I still have to be careful though as I was reminded the other day when I brought in the last of my left over spaghetti to work the other day, which was a bit more than usual. After I ate, I was OK and even still a little peckish, but then a little later, the full feeling hit me like a ton of bricks. It wasn’t quite the same as when one has seriously overeaten, but it was a feeling of, “You really ate too much.” Therefor, I am going to be more cautious about how much I pack (which is good).

The other area I have to be careful with is still dinner. Even going carb free there, because it is the meal after my carb meal, there can be a bit of a temptation to think, “Well, since it is carb free, I can eat a bit more” which would boost the calorie count, something I need to avoid.

As to why the Carb Addicts Diet was so difficult when I worked 12 hour shifts, that was because I had to bring in two meals. Frankly, especially when I went into a period of working a lot of overtime, trying to figure out what to bring in for a low carb or carb free meal was difficult and often what I would choose would be unappealing to me at work. That resulted in me pushing the four net carb limit, which I would often break and that breaks the whole system. So I just stopped trying.  Now that I do my no carb meals at home, I don’t have that problem. I can just do whatever strikes my fancy, and it is fresh, which makes a HUGE difference.

If I start losing more than three pounds a week routinely, I may drop the 5:2 Diet part and keep it in reserve. However, for 2-3 pounds a week, I’ll keep it in place so that Lord willing, in two weeks, I’ll FINALLY be below 330 pounds.