A new chapter starts in my life as I begin a new job. 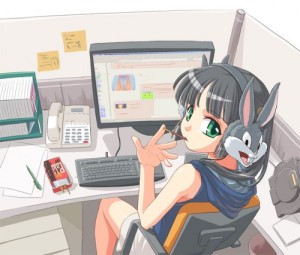 Things didn’t get off to a good start as Sunday night, I was amazingly not sleepy even though I went to bed when I had been going to bed. As such, it was well after midnight until I drifted off, but to make matters worse, I woke up a lot and ended up getting up much earlier than planned. I didn’t feel nervous, but I suspect that nerves might be playing a role there.

Regardless, after that, things went pretty well. Traffic will be a small problem, but I’ve got a great, comfortable vehicle with a 6 disc, MP3 player in it. So the kid in my can thump tunes on the way in.  ^_^

My new team are all guys my age, and so far, seem pretty cool. I’ve no idea if these guys are into more geeky things, but we’ll cross that road when we get to it. Things are pretty casual atmosphere-wise, which is awesome. Blue jeans tomorrow for sure. ^_^

As to the work, officially I’m an Operations Analyst, which is in the production scheduling family.  Looks like my main job will be to monitor a Remedy ticket queue for stuff assigned to my team (and there’s usually at least 50 tickets in the queue at any time), grab something, and perform the request, whether it be a change request, service request, or a problem ticket.

As for my work space, I have a decent laptop (Dell) provided me along with two, 22″ monitors. Making things sweeter is that this is connected via a docking station, something The Company couldn’t be bothered with when they forced crappy laptops on us (which I refused to use).

All in all, I’m fairly excited about things. Since “Company B” is not a huge company (its parent company is), it makes for a more friendly environment.

The only downside is that I’m still contractor scum, though it isn’t as bad here than it was at The Company. It is a weird work relationship as I’m a contractor, working at Company B’s site, but I’m actually contracted to Company C, who is a business partner of Company B’s and for whom Company B owns a percentage of Company C. It is rather convoluted, but everyone hopes that in the next couple of months, things start sorting themselves out.