With the recent announcement by Bethesda that Elder Scrolls V: Skyrim is now officially over (save for whatever small fixes that need doing), my wishes for at least two more DLC additions to the game are over. So, I thought I’d write about the two DLCs I would have liked to have seen. 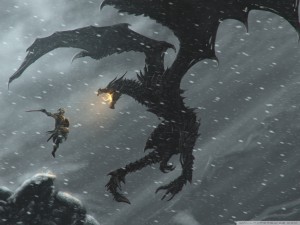 Going Back to See the Dwelmer

Longtime fans of the Elder Scrolls franchise would probably agree that one of the most intriguing mysteries of the games is what exactly happened to the elvish race, known as the Dwelmer (and sometimes referred to as “dwarfs”). Their steam punk ruins are explored in Morrowind and in Skyrim. During Skyrim‘s main questline, in addition to the various Dwelmer ruins seen on the surface, there is the massive cavern, known as Blackreach, which contains numerous Dwelmer structures and what is known as Silent City.

My thinking was that a DLC could be created, whereby a Dragon Break forms in the present due to the experimenting on an Elder Scroll by the Dwelmer in Blackreach in the distant past before they disappeared. As such, your character (and any followers) would use the Dragon Break to travel to the past and get to see Blackreach and all of the other Dwelmer places in a non-ruined state. For this DLC, my thinking was that your goal would be to ultimately have the Elder Scroll put into the place where you’d later find it for the main quest, then return to the present.

Going back before the Dwelmer disappear would allow fans to see the Dwelmer in action, doing whatever all they do. Bethesda could still retain the mystery by not actually revealing anything, but they could drop some clues that could support one or more of the theories out there to explain the Dwelmer disappearing en mass. There’s just something about interacting with the Dwelmer, seeing how they treat the Snow Elves (Falmer), and how the Nords felt about the Dwelmer back then just fascinates me so much. Alas, I won’t get to see this happen.

One of the plotlines for Skyrim deals with the Thalmor, the Altmer (High Elf) military regime. They defeated the Empire prior to the story in Skyrim, and now with a peace treaty in place, the Thalmor haughtily roam Skyrim and have agents in key locations. During the Civil War plotline of Skyrim, there are strong hints that this “peace” is about to break.  So, it would have been awesome for there to have been a second war DLC, whereby the player has to strengthen (or reforge, depending on how they played the Civil War storyline) Skyrim’s ties with the Empire, then do battle with the Thalmor all over Skyrim and Cyrodiil (and other places) as well.

It is possible that Bethesda could make Elder Scrolls VI, and have it set a bit after Skyrim,  but where the player has to battle all over Tamriel to defeat the Thalmor. That would totally rock. Seriously, is there an Elder Scrolls fan who wouldn’t like to be able to roam all of Tamriel?

I still have to finish getting my archer through the remaining sub-quests and then into the Dragonborn DLC (already visited the island). Here’s hoping that Bethesda starts work on the next, solo Elder Scrolls game soon.