Well now, well now. Looks like I had a bit of a setback for the week, which actually surprised me. I had been bad earlier in the week, but by Tuesday, I was only +1 over last Wednesday (346 pounds). I figured I’d be about even with last week, but somehow, I weighed 348 when I got up on Wednesday. *_*  So, I have my work cut out for me this week.

I did try a few more low calorie meals, which I’ll provide a quick review for.

The Smart Ones English Muffin Sandwich with Turkey Sausage is no McDonald’s Sausage Egg McMuffin, but it was still pretty good.  The sausage flavor was rather bland, so I did add some crushed red pepper to give it more pep. 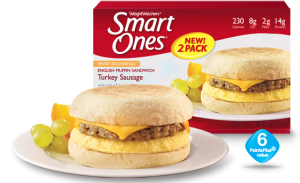 The next breakfast item I tried was Smart Ones Pancakes with Turkey Sausage.  The Smart Ones webpage for this product has all sorts of raves about this. I was unimpressed.  The pancake was so “meh,” the cardboard packaging looked like it would taste better. The turkey sausage links were rather bland as well (these things really need some spice added to them). The syrup package, which comes with warnings to throw it out if it isn’t used on this product, didn’t improve things. Heck, I even added butter, and that didn’t improve things. 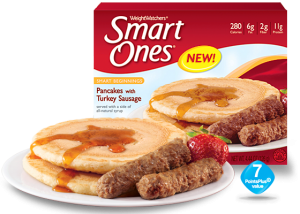 Part of the problem may be that I am used to my own, homemade buttermilk pancakes, which I only eat with butter and hot sausage (hot being a relative term). I’ve had pancakes at other places which were fine to me, but these were just not good.

On the Lean Cuisine side, I tried the Roasted Turkey Breast meal (290 calories), which is a bit larger than their other turkey dinner.  It was pretty good, though some the green beans didn’t look right. 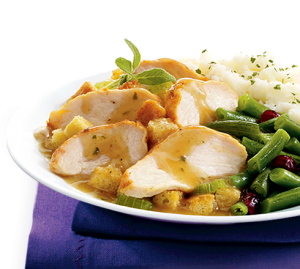 Wednesday, being a fast day, I tried two more Lean Cuisine products. For lunch, it was the Chicken Fettuccini (250 calories), which was pretty good. 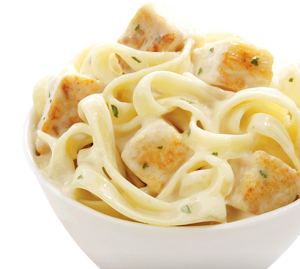 For dinner, I had the Lean Cuisine Swedish Meatballs (290 calories), which were tasty. I haven’t had Swedish meatballs since 1989 in Japan. Those don’t go well with a body full of adult beverages. ^_~ 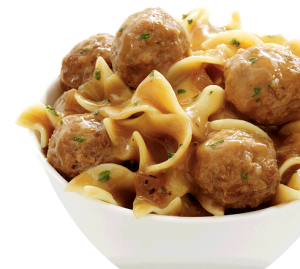 Tomorrow is a feast day.  Someone is making a run to Popeyes, so I’ll be participating in that.  I do love their spicy chicken tenders.