A very busy week has ended, and though I won’t get paid for the upcoming holiday, nevertheless, I’m looking forward to the time off.  Still, as it is the weekend, I need to hop on the scales to face my doom. Not a great week as I clock in at 220.0, which is a 0.8 pound increase over last week.  Were the 5:2 Diet part of my weight loss scheme still in effect, no doubt the one-two punch from that would have caused me to lose weight, but since that’s not in effect, it is time to figure out what went wrong.

This past week saw the usual pitfalls that I tend to fall into. On Sunday, I had a big breakfast for my carb meal. (OK, it was HUGE.)  Rather than stop when I hit the “satisfied” sensation, I kept eating anyway. *_* Even then, I still had stuff left over for a lunch on Monday. ^_^;

Wednesday, Dev-san and I went to a new Japanese restaurant about a ten minute drive from where we work. I hadn’t had tonkotsu ramen since I left Japan, so I was eager to have it. We also ordered some gyoza. Both were quite excellent, though I couldn’t finish my giant bowl of soup (I ate all the ramen, pork, mushrooms, and the boiled egg though).  The killer here was less the ramen (which I think is fairly high in calories), but the multitude of glasses of root beer that I had. No doubt there were a ton of calories there. ^_^; 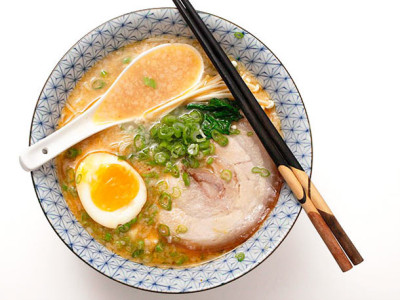 Friday saw free pizza enter the picture, which was the final nail on making sure I didn’t lose weight for the week.

Another element, which I’ve also mentioned before, is when I’m at home. I now have a work from home day, and I noticed that I was munching on things (low carb stuff to be sure to not violate the Carb Addicts Diet rules on carbs, but additional calories) throughout the day as I worked. When I’m in the office, all I have is what I bring in, so there’s nothing for me to get up and snack on.  I’ll really have to try to pay attention and stop myself from doing fridge raids.

Anyway, things could have been a lot worse. As it is, I need to just have some self control if I don’t want to bring back the 5:2 Diet element to force the weight loss.