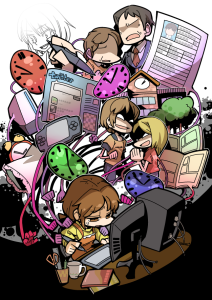 Now that I’m two weeks into the new job, I figured I’d write a bit about things.

One of the things I hate the most about being the new guy on a team is not having the specific knowledge to do the job. Sure, I’ll have that soon enough, but it is always frustrating to me on a personal level to not be in the know.  After all, when I left The Company, I was an OpenVMS guru on the team.  For my new job at Company B, I knew nothing of UC4.  Still, things are progressing forward. I’ve already impressed one of my coworkers, whom I’ll call “Beer Meister”, by how I’m rapidly picking up things.

That brings me to my new team. I’m the baby on the team, which is kind of humorous to me.  All three guys have been there for over twenty years, having started at lower level jobs way back when, and now they are where they are.  I think the changes to Company B have them a bit unsettled. Old Salty, a 400 pound ex-Marine with a vocabulary to make a profane person blush, got shifted from Company B to Company C, so he expects to be gone in 18 months unless he can shift to another department under the control of Company B. He’s quite a character to be sure, but he knows his stuff and is a good worker.

Beer Meister is pretty laid back. He liked beer and cheeseburgers, so he and I get along well on the second part of that (I’m not a beer person). He’s a hard worker and knows his stuff too.  He does get a bit flustered when he’s the oncall, namely because of the increased workload, but now that I’m on the team, as I pick up more things, I’ll be handling that increased workload, so the next time he’s oncall, he’ll hopefully have an easier time.

Finally, there’s Mustache. He’s a hard one for me to figure out. I’ve heard him described as an introvert, and I guess he is to a degree. The only person around that he seems to really engage with on a non-business level is Old Salty. He may be the most knowledgeable person on the team as both Old Salty and Beer Meister will consult with him on odd requests.

Our reporting manager is also a director at Company B. As such, he has several teams under him. I haven’t quite figured out how it all works, ’cause I don’t think the folks in Ops report directly to him, but are under him. Regardless, Mr. Director is one of those managers who knows a ton about the actual work that’s done and the business workings of Company B.  So, at times, he’ll roll up his sleeves and help us when needed despite his title and how busy he is with all of the executive things he has to do. At the same time, he’s a very laid back kind of guy. If you do the work, he’s not going to have a problem with you. My kind of manager.

It really is a shame that Company B is being broken up like it is. Man, I wish I had known about this place years ago. Even if the place goes away in two years (which might happen if the parent company on the east coast decides to send the work that way), it would still have been a blast to work at.  While I loved my coworkers at The Company, Company B was just the kind of company I would have loved to have been a part of.  Oh well.