I thought I may have blown the week when on one of my fast days, my contract company account rep for Company B brought in a big box of Einstein Bros bagel sandwiches and wraps. Because Company B does a fair amount of business with her, I guess this is her way of saying thanks.  Plus, free food always makes a person more acceptable.

Regardless, since I just couldn’t turn down free food, I did grab a Turkey Sausage and Cheddar Egg Bagel. It was only labeled as “sausage” by the wrapping in the box, so I just presumed it was pork sausage since I’ve never eaten at Einstein Bros, namely because I’d never eaten a bagel before (not that I recall at least).  While eating this bagel sandwich, which was OK, I kept thinking, “Man, I wish people would do sausage properly.” Then it hit me — since Einstein Bros is not only an expensive place, but somewhat of a niche place, they might not be using pork sausage.” 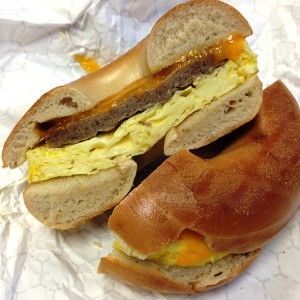 So, I checked the website and sure enough, it was turkey sausage. No wonder if was only just OK. However, that made me think that there was an outside chance that I was still good for the fast day.  Upon further investigation, I saw that Einstein Bros says this sandwich is 540 calories (give or take a few,mind you).  Seeing that, I just didn’t eat anything else for the day save for a very few Cool Ranch Doritos.

I still need to work on not giving into temptation, but thankfully, this time it didn’t harm me. ^_^;