I’m running behind on this week’s post, but better late than never. When I got up this morning, the scales reported my weight as 316 pounds, which is a 2.4 pound drop from last week’s 318.4. Initially, I didn’t believe it because I had a really bad Saturday to start things off, but repeated weight checks kept popping up the same result. ^_^

As to that bad Saturday, Pizza Hut is currently running a $10 pizza special with any toppings (extra charge for stuffed crust pizza or extra cheese). So I bought a couple of those as I planned to freeze most of it. However, as usually happens when I order freshly made food, I ended up eating way more than I should have, even though my “satisfied” switch had been flipped on, thanks to the Carb Addicts Diet. Out of the freezer, I can microwave or reheat in the oven a slice or two of pizza and I’m good, especially with sliced tomato on the side.  Fresh, I can easily eat six or more slices. ^_^;

Wednesday will be my Japanese food day. Dev-san, myself, and another developer or two will be hitting a nice Japanese restaurant about 10 minutes from work on most Wednesdays. This past Wednesday, I had my favorite Japanese dish, katsudon (fried, boneless pork cutlet which is then finished off by cooking in an egg mixture, along with grilled onions and served over rice). Man was it good. We also tried some shumai (a type of dumpling) which was good as well. I meant to take a picture of the meal, but I spaced it. So, here’s a stock image. 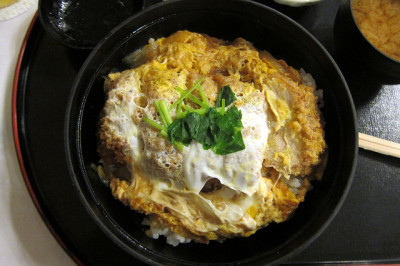 This Wednesday, I think we are doing the udon/tempura set, which I’m looking forward to. ^_^

So, despite a bad day to start things of with, the rest of the week was pretty good and I am happy with the 2.4 pound weight loss. I’m hoping for another good result next Saturday.