Well, the birthday celebrations are over, but there are some other celebrations on the horizon, which I’ll deal with later. In the meantime, it is time to see what damage I did to myself during my food fun.  As it turns out, the damage wasn’t nearly as bad as I’d feared as I clocked in at 336.0, which is a four pound increase from my last weigh in two weeks ago.

As to the new celebratory food fun, that stems from the fact that I recently accepted a position at a new company, starting in a couple of weeks. As such, there are a couple of “congrats ANB” things planned that I’m aware of. As such, I don’t think I’ll have any massive damage to my weight loss goals.

(I’ll write more about the new job in the next couple of weeks).

On the low calorie food sampling front, I decided to try Stouffer’s Signature Classics Baked Chicken Breast since it clocks in at only 220 calories a meal.  Flavor-wise, I think it tastes better than the Hormel’s Compleates Chicken Breast & Mashed Potatoes.  However, the gravy, while tasting fine, is a bit watery. So when mixed with the mashed potatoes, it becomes this muck that almost needs to be consumed with a spoon.  The potatoes taste really good on their own, so they don’t need that much gravy. 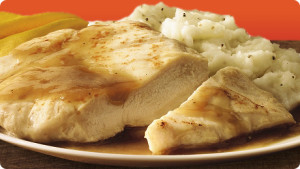 Anyway, I’m back on the wagon as I start the 5:2 Diet anew.  It is a new year from a birthday stance and I have a new job to boot. So here’s to a good year where I can actually report some significant weight loss next year at this time. ^_^