After the great week last week, this time there’s no progress to report as I weighed 345.2 again. Disappointing to be sure.

In the IT business, we have what is called a Root Cause Analysis process to determine what went wrong and what can be done to prevent the failure to happen again.  In the case of my weight, I believe the cause was my working extra overtime.  Since that means more stress, as I have to deal with Indians even more than normal, I tend to revert to “stress eating”, meaning I eat a lot more than I should. For example, I purchased a bag of chips last week which I wasn’t going to open until Thursday, when Camel Jockey-1 was going to bring in for the crew these specialty sandwiches he makes.  Instead, I ended up scarfing the entire bag. *_*

So, to avoid this kind of failing, I need to keep snackable foods away from me.  Nothing wrong with having chips with a sandwich, but no use in buying them so far out to just tempt me.

Also, when I’m getting angry with India, I need to just find other means of relieving the stress other than eating. Not an easy thing for me, I’m afraid.

Last week on my second fast day, I tried something a bit different. I had a couple of Smart Ones Canadian Style Bacon English Muffin Sandwiches. They were OK, but the combined two of them were 420 calories.  Basically, I wanted to see the effect of eating more calories at one sitting and then only about 100 calories when I got home. I decided that I think I preferred doing two “meals” that keep me well below 600 calories for the day, followed by a bacon snack of ~50 calories (still under or right at 600 calories). Doing it this way keeps me from being as irritated on fast days. 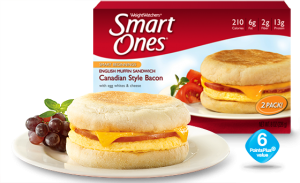 I see that McDonald’s has a new Egg McMuffin made from egg whites and clocking in at 250 calories. I have a coupon so I may try that on Friday, if I remember to pick one up on the way home.  If I do, I’ll let you guys know.