As I get older, I’ve noticed a trend in video games that is completely opposite of the trend for movies, TV shows, and music.  For entertainment videos and music, consumers demand choices to let them play a movie or listen to a song WHEN they want and HOW they want. For the gaming community, they’ve all dropped trousers, grabbed their ankles, and said, “we are grateful for whatever you give us, even if it means being a slave to your system!”  How the heck did that happen? 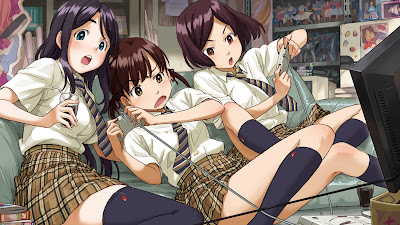 The advent of the VCR helped change all that.  Suddenly, TV programs could be recorded and then watched LATER when the consumer felt like it.  People had the freedom to watch part of a show, or indeed all of it, and even skip the commercials if they wanted.  Once movies started appearing on cable channels, like HBO, the VCR opened up the realm of movies so that again, people could record movies off the TV and watch them at their leisure.  Not only that, but once movies started being officially released on VHS, consumers could buy copies and again, watch when and how they wanted.

Of course, the movie and TV industry were outraged by consumers having their own choices and branded the VCR as nothing but pirate equipment. They tried to sue the technology out of existence and lost (and it was only then that they decided to try to capitalize on what consumers were demanding).  The loss has NEVER been forgotten by Big Entertainment, who’ve continually looked for ways to get consumers to pay them constantly for the privilege of watching a TV show or movie. One such scheme was the DVD player that was “enhanced” with DIVX, whereby the consumer purchased a DIVX DVD, but once they put it into the special player and unlocked it, the DVD was only good for two days.  After that, consumers had to pay for the privilege of watching again.  Immediately, campaigns appeared on the Internet to stop this, and it didn’t take long for the scheme to fail.

Both Big Entertainment and the music industry fought tooth and nail against consumers accessing digital versions of movies, songs, or shows, all in the name of fighting piracy. Here too, despite massive legal and PR campaigns to stop this rampant piracy, the industries have been forced to give consumers more of what they want, with the music industry even dropping hideous DRM requirements (Big Entertainment still refuses to do that).

So on the music and video front, consumers have forced the industry to listen to them and give them what they want — the freedom to watch or listen to products when, where, and how they want…well, more so than what we used to have.

Oddly enough though, the video game industry has gone just the opposite way.  Back in the days of PC’s with MSDOS, folks like me used to buy floppy disks and trade copies of games with each other as most of us didn’t have the money to go out and buy all the games we wanted. (Many of use would go and buy legit copies later when we had the money, especially if it had a sequel.)

The video game industry attempted to stop piracy by making it impossible to use the DOS DISKCOPY command.  Someone crafty invented a bitcopy program that got around that.  The game industry came out with challenge questions. (What’s the fourth word of the first paragraph on page 3?)  Folks got around that by copying manuals.  The game industry tried using code wheels and other forms of protection, but folks always foiled them.  When games started being released on CD’s, software keys were created, but they too were overcome.

So now, the video game industry decide, “screw you paying consumers — you’ll play the games we make at OUR whim, all so we can stop a few pirates.”  They accomplish this through the act of forcing everyone to play online.  Oddly enough, most gamers gladly comply, even if they get thrown of the server in the middle of a game, find that lag causes their character to get killed, etc.  I find this to be amazing.

Secondly, a lot of people who get pirated copies of game do so in order to try out the game first, just to see if they’d even like it. Others get a pirated copy because finances are such that they can’t afford $60 (or something).  However, these folks will more often than not go out and purchase the game later on.  Were the industry forced to take these people into account when calculating piracy numbers, the figures would be dramatically lower.  Since accurate numbers don’t help the narrative that piracy is killing the universe, we won’t ever see an accurate picture.

That aside, it doesn’t answer the question of how the gaming industry managed to do what the video and music industries haven’t been able to do — get consumers to WILLINGLY cede freedom of play for the bonds of restrictive, and sometimes intrusive DRM schemes.

Part of it probably has to do with the mentality that some folks have where they’ll be willing to do anything for something that is good or cool.  For example, if I had $1-million to give to someone, but the condition for getting that money is that they’d have to be gang raped by gorillas three times a day for the next ten years, there would be plenty of takers.  In terms of games, if a game is said to be totally awesome, well what are some server outages, lags, etc. for having something cool?

However, I think the majority of the reason that young people today are so willing to accept being forced to jump through game company online hoops in order to play a video game is that even if a game isn’t an MMO (such as Diablo III), is the whole, social aspect.  “I can talk to my friends and play games at the same time.”  Back in my day, we had to go to our friend’s house to accomplish this, so the online aspect lets folks “keep in touch” as it were, but still play games.

Me, I don’t play games to socialize. Sure, back in the day, I’d go with friends to game arcades, or I’d go to different friend’s homes to play video games.  We were certainly socializing, but those were simple games.  When it came to more in depth games, like Bard’s Tale or Starflight, people weren’t interested in talking, only playing.  We’d do our talking later when we’d all meet up somewhere.

I realize I’m just an old fogy here, but in addition to not caring about socializing with people, I like to be able to play a game WHEN I want, for HOW LONG I want, and WHEREVER I want.  The online-only aspect of games today kills that.  I can only play the game WHEN the game servers are up, or WHEN I have an Internet connection.  I can only play for as long as the GAME COMPANY allows, so if they need to shut down the servers for whatever reason, or if they decide to stop supporting a game, those with online-only games are out of luck.

Let’s face it, Activision Blizzard probably LOATHES the fact that I can STILL play Diablo or Diablo II whenever I freaking feel like it, because they are LOSING A SALE on Diablo III.  Too smegging bad.  Even if Activision Blizzard goes bankrupt, I can STILL PLAY.  Not only will I still play these old games, I’ll one up ya and break out the serious old school RPG Rogue. How ya like me now?  ^_~